Keep them out of the landfill.

Help Girl Scouts earn money to travel to the International Jamboree in England.

You can do all of this by simply donating your shoes. Please don’t donate shoes that have been worn out and are no longer usable.

There is a box in the entryway at Wesley Church and other throughout the southern end.

We’re starting a network-wide bible study with weekly video introductions by Francis Chan and David Platt. Pastor Blake & Pastor Rich are inviting the whole church family to join us in this adventure of living out real Christianity. You can join us either on Tuesdays at 6:30pm or Thursdays at 9:00am starting October 5th & October 7th.

The Wesley Men's Ministry Cruise In

The Men’s Ministry is looking for 10 men to help with the Cruise In on September 25th from 7:00am to 2:00pm. Please contact Earl Rutledge at 717-201-8916 if you are interested in helping out with this ministry.

Men’s Ministry is having their next Men’s Breakfast coming September 18th starting at 8:00am. If you are interested please register at the Men’s table in the Great Hall.

28 And we know that in all things God works for the good of those who love him, who[a] have been called according to his purpose. 29 For those God foreknew he also predestined to be conformed to the image of his Son, that he might be the firstborn among many brothers and sisters. 30 And those he predestined, he also called; those he called, he also justified; those he justified, he also glorified.

31 What, then, shall we say in response to these things? If God is for us, who can be against us? 32 He who did not spare his own Son, but gave him up for us all—how will he not also, along with him, graciously give us all things? 33 Who will bring any charge against those whom God has chosen? It is God who justifies. 34 Who then is the one who condemns? No one. Christ Jesus who died—more than that, who was raised to life—is at the right hand of God and is also interceding for us. 35 Who shall separate us from the love of Christ? Shall trouble or hardship or persecution or famine or nakedness or danger or sword? 36 As it is written:

“For your sake we face death all day long;
we are considered as sheep to be slaughtered.”[b]

37 No, in all these things we are more than conquerors through him who loved us. 38 For I am convinced that neither death nor life, neither angels nor demons,[c] neither the present nor the future, nor any powers, 39 neither height nor depth, nor anything else in all creation, will be able to separate us from the love of God that is in Christ Jesus our Lord. 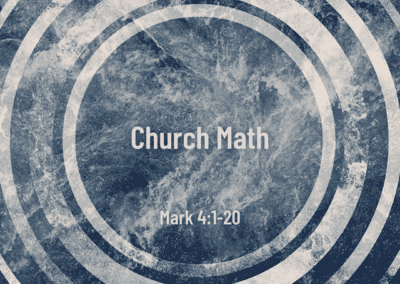 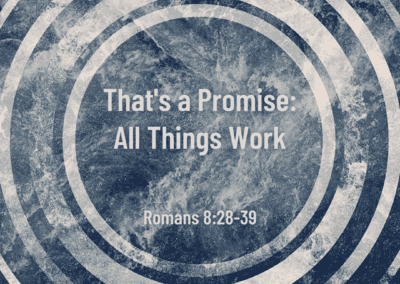 That’s a Promise: All Things Work